A Morab at Tevis

Posted at 11:26h in Uncategorized by Nyssa Sheridan 0 Comments
2 Likes

The Tevis Cup, is one of the world’s best known endurance races.  Held in Northern California, it is a grueling one hundred mile race, testing the limits of both human and equine stamina.  In this sea of one hundred and seventy-two entries, there was a Magnificent Morab “Shaughnessy’s Autumn Harvest”, lovingly owned and ridden by Wendy Carnegie.  Wendy found Autumn as an underweight three year old and despite the fact she was looking for a seasoned, taller endurance mount, she felt compelled to bring Autumn home.  Autumn has repaid that faith in spades.  In 2015, Autumn won the titles as high point Canadian and Manitoban endurance horse.

Wendy set her sights on Tevis.  Tevis is known as a heartbreaker endurance race, where even some of the most successful horses in the world can be pulled due to a thrown show, subtle lameness or colic, or rider injury and fatigue.  It is over grueling rocky terrain and is a test of true courage to complete.

On Tevis day, the riders wake early and saddle up.  Wendy was in the saddle for twenty-three hours over rocks, along canyons, and through the trails.  At one point, Autumn lost a shoe before “Cougar Rock”, one of the most iconic points along the Tevis trail.  Some wonderful volunteers managed to remove the shoe, apply a hoof boot which Autumn had never worn, and sent them along.  The shoe was reset at the next check in point and they continued along, coming in to the finish line just after four in the morning.

In a sport that to finish is to win, Wendy and Autumn came in 49th out of 87 horses.  This is a remarkable accomplishment for this little Morab mare and her rider from Manitoba.

Autumn is registered with the Canadian Morab Association and is by the heavily Lippett stallion “Schiehallion Shaughnessy” out of the Straight Egyptian Arabian “EAI Sareena”.  This cross of Arabian and Morgan produced this beautiful, athletic Morab that we know and love.  The Morab often blends the endurance and stamina of the Arabian with the strength and work ethic of the Morgan heritage.

Let’s come together and congratulates this wonderful rider/horse pair that shows once again what the Magnificent Morab can accomplish! 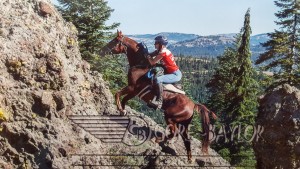