Morabs at the Midwest Horse Fair, 2014

Posted at 17:08h in Uncategorized by Jane Licht 0 Comments
0 Likes

Despite the equine virus threat and the last minute loss of two horses that were supposed to be in the Morab breed demonstration, the International Morab Breeders” Association Morabs made quite a splash at the Midwest Horse Fair.   Those who brought their horses and who were helpers worked as a team and did their part so that the show went on regardless of challenges.

Special recognition goes to Jeanine Schollmeyer of Marshall, Wisconsin, who prepared the inspiring and humorous music that fit the story so well. Jeanine used her artistic talents to create a coloring book illustrating our Morab fairy tale that was used for the demonstrations in the coliseum. Copies of the coloring book were available for children who visited the Morab booth. Jeanine prepared Dash for his repertoire of tricks that were done during the Morab demonstration and as usual, they were real crowd pleasers. 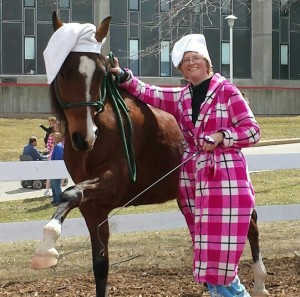 Wendy Konichek brought her Horse Power and Healing Center horse Shawna that Josh Horne rode in the demonstration. Josh was the “guardian of the forest” and his grandmother his appropriate-looking costume.  Wendy and her friend Ashley Berndt were side walkers for Josh.

Our three witches really looked the part with their pointed hats, 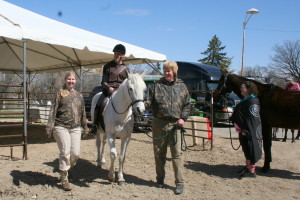 capes and striped stockings. Witch Sandy Gorman made all the capes and brought her chestnut horse Alphie that she uses for trailing riding. Jodi Johnson, witch number 2, used her horse Shallie, a gorgeous dark bay mare, and witch number 3, Jamie Berndt, was in charge of Jeanine’s young gelding named Fox. 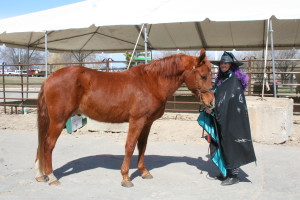 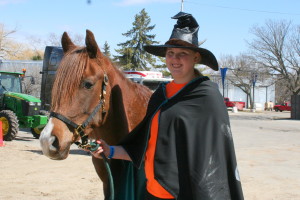 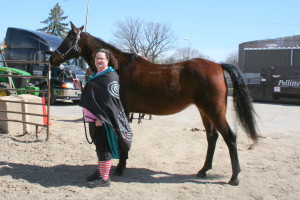 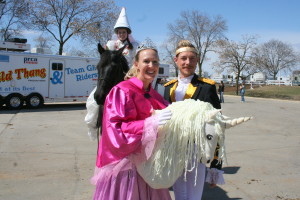 Sara Licht had cleaned up our horse Lady Thursday morning to fill in for a missing horse, and she resorted to making a very pretty stick horse to replace the second. Sara was the princess in our fairy tale. The witches turned her handsome prince into a frog but with lots of Morab magic, he was turned back into a prince again at the end of the skit.
Keelin Kelly was the good fairy and made quite an impression as she entered the coliseum on Lady, a black bay who contrasted nicely with Keelin’s long white gown and medieval-like cone hat with netting and ribbons flowing out the top.   Wes Licht drove his lovely palomino mares, Rosali and Gracie. He was in full wizard costume and his carriage fully decorated so he too received recognition from an appreciative audience. Mike Blattner was our handsome prince hidden under a black sheet in the back of the wagonette. At the proper moment after the words “Magificient Morabs,” he magically appeared to the delight of the princess and chuckles of the audience. 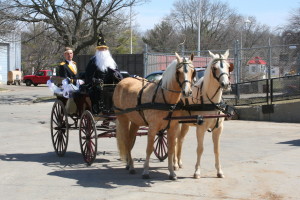 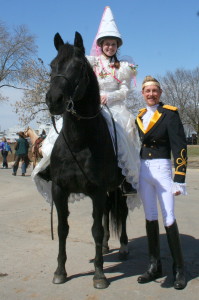 This was the bedtime story that was being read to Dash by Jeanine who remained in the center of the arena and did more tricks at the end. Our troop lined up, took a bow (including a huge bow by Dash) and the audience responded with enthusiastic applause. Several people stopped by our Morab booth to tell us ours was the best demonstration they had seen. At least it really did follow the Midwest Horse Fair theme, “Horse Tales,” and it was very entertaining. Our Morabs were also used for several presentations at the Midwest Horse Fair in the Hutchison Round Pen. As a group, we use our horses for dressage, trail riding, horse shows, carriage classics, combined driving events, jumping, distance riding and driving, therapeutic riding, riding lessons, sleigh riding, carriage service, team penning, soccer playing, and we teach them tricks.